I have been offering Thai Massage since 1997 when I studied Thai Massage with Asokananda outside Chiang Mai in a Lahu village. The program was intensive along with total immersion into a very rural cultural primitive experience. I am forever grateful, the experience imprinted a healing state of being and approach to bodywork that I could never achieve on my own or elsewhere. Below is an excerpt from his book I believe first published in 1990. In peace and loving kindness. -david

The Art of Traditional Thai Massage

Traditional Thai massage can look back at a long history of therapeutic healing. If one traces the evolution of the techniques of healing massage practiced in Thailand, one discovers the astonishing fact that the earliest roots of Thai massage lie not in Thailand but in India. The legendary founder of the art is believed to have been a doctor from Northern India. Known as Jivaka Kumar Bhaccha, he was a contemporary of the Buddha and personal physician to the Magadha King Bimbisara over 2,500 years ago. The teachings of Kumar Bhaccha probably reached what is now Thailand at the same time as Buddhism – as early as the 3rd or 2nd century BC.

The theoretical foundation of Thai massage is based on the concept of invisible energy lines running through the body. The Indian origin and influence is obvious here since the background of this theory clearly lies in Yoga philosophy. Yoga philosophy states that life energy (called Prana) is absorbed with the air we breathe and with the food that we eat. Along a network of energy lines, the Prana Nadis, the human being is then supplied with this vital energy. Out of these energy lines Thai massage has selected 10 mainlines on which there are especially important acupressure points. Massaging these lines and points makes it possible to treat a whole range of diseases or to

relieve pain. The 10 mainlines are sufficient to conduct practical treatment for the whole body and its internal organs. Disturbances in the flow of energy result in an insufficient supply of Prana, which will in turn lead to sickness. Working on the energy lines with massage can break the blocks, stimulate the free flow of Prana, and help to restore general well-being.

Looking back at the tradition of Thai massage it is very clear that it was never seen as a mere job. Massage was always considered to be a spiritual practice closely connected with the teachings of the Buddha. Until fairly recently it was the Buddhist temple, where massage was taught and practiced. Even today one of the most important massage schools in Thailand is at the Wat Po monastery in Bangkok. The establishment of legitimate massage facilities outside of the temples is a recent development.

The giving of massage was understood to be a physical application of Metta, the Pali (and Thai) word used in Theravada Buddhism to denote ‘loving kindness’ – and devoted masseurs still work in such a spirit today. A truly good masseur performs his art in a meditative mood. He starts with a Puja, a meditative prayer, to fully center himself on the work, on the healing he is about to perform. And he works with full awareness, mindfulness and concentration. There is a world of a difference between a massage performed in a meditative mood and a massage just done as a job. Only a masseur working in a meditative mood can develop an intuition for the energy flow in the body and for the Prana lines. 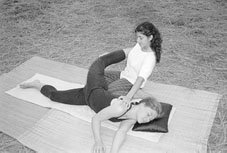 Contrary to Western style massage, traditional Thai massage does not primarily work with the physical body but rather with the energy body of man. The kneading of muscles, which dominates in Western style massage, is absent from Thai massage: energy points are pressed or general pressure is used instead. There is a lot of stretching involved and many exercises might well be described as ‘applied Hatha Yoga’ or ‘applied physical Yoga’. Rather than using the term ‘Thai massage’, it wouldn’t be a bad idea to actually call it ‘Yoga massage’ since that’s what this art essentially is.

When my book The Art of Traditional Thai Massage was published in Bangkok in 1990, Thai massage had just started to emerge from the state of obscurity it had been pushed into by the advance of Western medicine. In the mid 80’s, at the time when I got fascinated by and ‘hooked’ on it, Thai massage had seemed to be a dying art. Chemical drugs more and more had replaced home remedies and traditional cures and the reputation of Thai massage had sunk to the point of being regarded as quack practice. This was not helped by the fact that thinly disguised prostitution in massage parlous was masquerading as ‘Thai massage’. Substandard massages offered at the beaches and in some commercial massage places made matters worse.

The picture changed considerably in the late 80’s. The limits of Western style medicine became apparent, bringing about a revival of interest in alternative health care in the West and to a certain extent also in Thailand and other countries of the East.

All of a sudden Westerners in search of traditional ways of treatment discovered Thai massage. Doctors, nurses, physiotherapists and masseurs on one hand, and people with a background in yoga, yoga therapy and meditation on the other hand, came to Thailand to supplement their knowledge with training in traditional Thai massage.

Increasingly also people in Thailand seem to realize that for certain ailments like asthma, constipation or frozen shoulders and to help recovery after a heart attack or to regain mobility of the limbs after a stroke – to mention only a few – Thai massage treatment is far superior to conventional medicine and therapy.

Owners David Schoenberg and Marisa DelMonaco are both licensed massage therapists in New York and Connecticut. As holistic practitioners, they assess the whole body for imbalances between opposing and associated muscle/fascia/skeletal groups. Utilizing the principles of neuromuscular, myofascial, craniosacral, polarity, nutrition, Thai and somatic therapies they will work to relieve stress and restore the body to optimum health.